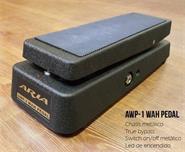 Sound — 9
I use it with a Yamaha Pacifica 012 into an RP50 and then into the wah-wah. I use a Samick: SM-60RC amp. The manual says that it should be used before any delay/reverb/chorus etc effects, so I don't have them on the RP50 when I use this. I use it behind the RP50 in the lineup because it sounds awful if used in front of distortion effects. I believe it sounds just as good as a cry-baby wah, and this is half the price. As soon as I turned it on I managed to get a recognisable intro to Voodoo Child going and after some practice, it, not me, could recreate that sound perfectly. I've also attempted some Kirk Hammet solos and some funk riffs and it works great. It doesn't quite acheive the tone of the more expensive Morley and Hendrix Wah's.

Overall Impression — 9
I play metal, rock, funk and some jazz and this suits any of that sort of music that involves a wah. I've been playing for two years and this has immensely expanded my playing abilities and versitility. I love it's ease of use and the classic cry-baby sound it has. There is nothing I hate about it. If it were lost or stolen I would probably try out some more expensive models before buying it again but I would probably end up buying another one because of it being such good value for money. I would recommend this to anyone Who can find one of these because it is every bit as good as other wah-wah pedals I've heard, for a fraction of the price.

Reliability & Durability — 8
If I took it to a gig I would definitely use a power supply rather than batteries or take a few spare batteries because as the battery power gets low the sound cuts out when the pedal is up. Other than that it weighs 2 kg and is very strong and durable so it would take a huge amount of force to crush it. This pedal would probably last a lifetime if well looked after.

Ease of Use — 10
This pedal is as simple as a pedal should be. All it needs is one 9 volt battery or a standard AC adaptor (not included). Then you just plug your guitar lead into the side that says 'Guitar In' and it turns on. it's Status is represented by a red LED light. It's like any wah-wah, pedal down for treble and pedal up for bass, and then you just rock it back and forth to get that 'wah' sound. If you haven't used a wah-wah before it takes a bit of practice to get it sounding good. The manual provided was very good. It had a few tips about the best ways to use the pedal and the specifications and stuff. It can also be used as a bypass pedal which is activated by simply pressing it all the way down until it clicks. The light goes off but it is still on. It doesn't turn off until you take out the guitar in lead.